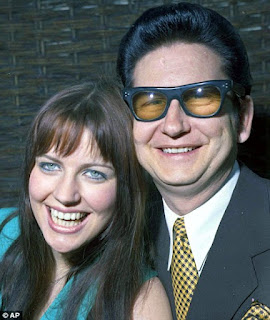 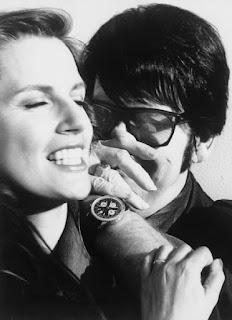 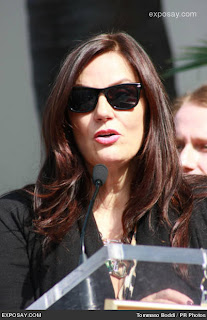 Barbara Orbison, the widow and manager of rock 'n' roll pioneer Roy Orbison, has died on the 23rd anniversary of her husband's death.

Since the 1980s, Barbara Orbison devoted her time to managing her husband's estate and keeping his legacy alive.
With her son, Roy Kelton Orbison, she co-produced a four-CD box set of her husband's 107 recordings.

Roy Orbison: The Soul Of Rock And Roll was released in 2008 and contains all of his hits and 12 previously unreleased tracks.

The package marked the first all-inclusive body of his work from his earliest recordings to The Travelling Wilburys' debut album, Mystery Girl and his last live performance.

Roy Orbison died the same say, December 6 in 1988 at the age of 52, in the midst of a comeback with The Travelling Wilburys.

Lisa Swayze, widow of actor Patrick Swayze who died in September 2009 from pancreatic cancer, said: 'Patrick and I always had a warm connection with them both.
'Now we ahve lost this wonderful lady.'

In 1998, Mrs Orbison issued Combo Concert on her label Orbison Records, a collection of previously unreleased live recordings from Holland and France made in 1965, according to Roy Orbison's official website.

That same year, she accepted the Recording Academy's Lifetime Achievement Award on her husband's behalf, which honoured his contribution to the recording industry.

In January 2010, Mrs Orbison accepted a star on the Hollywood Walk of Fame on her husband's behalf.

Still Working Music, her music publishing company based in Nashville, Tennessee, was recently awared BMI's 2010 Song of the Year for Taylor Swift's You Belong With Me.

She had been in hospital since May battling cancer.

Mrs Orbison will be buried next to her husband at Westwood Village Memorial Park in Los Angeles, publicist Sarah McMullen said. A celebration of life is planned in Nashville.

She is survived by her sons Wesley Orbison, 46, Roy Kelton Orbison, 41, and Alexander Orbison, 36.
*** COMMENTS:
*This is so sad. i saw her on the show selling new york (american real estate show) about 7 months ago, and she looks fantastic. so sorry!

*What a beautiful lady, and so respectful of her late husband's career. Far too young to pass from this incredibly cruel disease. Rest in Peace Barbara!
- Minnie, Cornwall, 07/12/2011

**I'm so sad to hear that Barbara has passed away. And shocked, 60 is my own age, and no age at all.
Barbara was a great source of consolation and inspiration to Roy, the other great love and pretty woman in in life, but not always duely recognized as such. She was instrumental in Roy's successful bid for a comeback in the eighties and stood by him in difficult times in the late sixties and gave him a new family in the seventies. She was the inspiration of beautiful songs like God Love You. In recent years she gave us THE Roy Orbison Collection The Soul of Rock and Roll along with many other releases over the years many, many other important Roy releases.
Many years back I had some correspondence with Barbara and was later updated about the lives of the family members through mutual friend Derek Neill, an old fan and trusted associate of the estate. From the little I knew Barbara personally she was a considerate and giving person. As to her role in Roy's life and career, she was of immense importance.
My heart goes out to Roy2, Alex and big brother Wesley and the rest of the Orbison family.
/Jesper

*****
+Barbara Orbison (January 10, 1950  – December 6, 2011) was a German-born United States-based entrepreneur, music producer/publisher, and the widow of American musician Roy Orbison.+
Barbara Anne Marie Wellhöner Jakobs was born in Bielefeld, Germany.On July 21, 1968, Barbara (then 18 years old) met the 32-year-old Orbison when he asked friends to introduce him to her at a nightclub in Leeds, England, during Orbison's tour of Great Britain. They married on March 24, 1969, in Hendersonville, Tennessee. They divided their time between Nashville and Malibu, California, raising their two sons, Roy Kelton Orbison, Jr. (born 1970) and Alexander Lee Orbison (born 1975).

During the 1980s, she managed her husband's career and was the executive producer of his 1987 album, In Dreams: The Greatest Hits plus his highly acclaimed January 1988 televised music special, Roy Orbison and Friends, A Black and White Night. Following her husband's death in December 1988, she took charge of his business affairs and dedicated herself to promoting his music to ensuing generations. She worked with friend and fellow artist Jeff Lynne to put together the posthumous release of the King of Hearts album in 1992 (an album which was re-issued in 2007 by Sony BMG after they took charge of Virgin's catalog in 2005) as well as other record projects. She co-produced Only the Lonely: The Roy Orbison Story, a European stage musical.
In late 1993, the family home in Malibu was destroyed by brush fires. Although she maintained a residence on the West Coast, she returned to Nashville where she purchased a home as well as a commercial property to house her music publishing business. Her company, "Still Working Music", employs songwriters such as Tommy Lee James and Billy Burnette.

Orbison was also involved with charitable causes in aid of the homeless. For Showtime, in 1991, she produced a Roy Orbison tribute at the Universal Amphitheatre in Los Angeles that raised in excess of $1 million for the city's homeless. She personally funded "Orbison House", a 21-unit residence for the mentally impaired homeless of Los Angeles.

She produced Damien Leith's album, Roy: A Tribute To Roy Orbison, which was released by Sony BMG in Australia on April 15, 2011 to coincide with what would have been Roy Orbison's 75th birthday.
Death
Barbara Orbison was hospitalized from May 2011 until her death on December 6, 2011, aged 61, from pancreatic cancer, 23 years to the day after her husband's death. She was buried next to her husband at Westwood Village Memorial Park Cemetery in Los Angeles. This was followed by a celebration of her life in Nashville, Tennessee. She was survived by her sons Roy Kelton Orbison (born 1970) and Alexander Orbison (born 1975).