WASHINGTON - May 14, 2008
Michael Jackson's "Thriller" album is considered important enough to keep for all time.
It's among the 25 recordings added to the Library of Congress' National Recording Registry, which preserves recorded works that are considered culturally or historically important.

This year's additions include "Oh, Pretty Woman" by Roy Orbison and "The Tracks of My Tears" by Smokey Robinson and the Miracles.
Joni Mitchell's "For the Roses" album has been added, as has the original cast recording of "My Fair Lady."
The recordings aren't all music.
Others that have been added this year include the first Trans-Atlantic broadcast from 1925, Harry Truman's speech to the 1948 Democratic Convention and the "Sounds of Earth" disc prepared for the Voyager spacecraft in 1977.

Posted by Slobodan Darko at 5:39 AM 4 comments: Links to this post

* MEMORABILIA
Two copies of my "fan-books" "Roy Orbison - Remembrance, Part One & Two" in Serbian language, with some drawings, exposed into The Roy Orbison Museum, Wink, TX. With my hard work with translation, typewriting, copying, literary treatement, artistic edition, book-binder's work... it is just a part of my love and gratefulness to this man and his touching music.
Slobodan 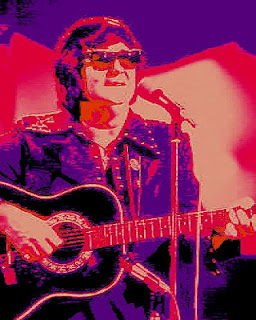 Hello,
I am his devoted fan.
Roy Orbison is definitely one of the biggest stars of the Rock & Roll era. But, sadly, about half the songs recorded by one of the greatest recording artists of the 20th century have never been released. Will they ever be heard?
Enjoy his songs and other music -mostly country and especially ballads - from my site, be happy and well, always.
Remember ROY ORBISON, his work and beautiful music!
FOR ROY!
/Slobodan

Roy Orbison: "I'm sure we had to study composition or something like that at school, and they'd say 'This is the way you do it,' and that's the way I would have done it, so being blessed again with not knowing what was wrong or what was right, I went on my own way....So the structure sometimes has the chorus at the end of the song, and sometimes there is no chorus, it just goes...But that's always after the fact--as I'm writing, it all sounds natural and in sequence to me." 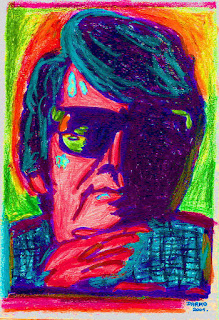 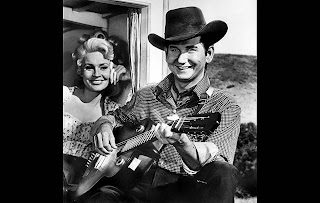 Posted by Slobodan Darko at 7:13 AM 5 comments: Links to this post

THE THIRD ANGEL - Roy Orbison and the Angelic Visitation, by Leon Thompson

As we watched TV on New Year's Eve, the old year slipped away with fireworks blasting through the air, bells ringing, and all kinds of noise. When the doorbell rang at first, I did not want to stop watching TV to go answer it. But when it rang a second time, I walked to the door and opened it. There stood the most beautiful woman I have ever seen in all my years. She was so much like the statue of Helen of Troy that I didn't notice what she had in her hands when she began speaking with me.
Her hair was like gold and her looks were outstanding. Her perfume was strong like a rose. I was at a loss for words, but slowly she began to tell me that she had an object that belonged in the Roy Orbison Room Lounge at the Wink, Texas, Airport.
A Celestial Meeting
It should have been dark outside, but for some reason the entire front yard took on a soft, yellow glow and a warmth that I have never felt in my life. As I stood looking, she presented me with a cherub-like figure. It was about 12 inches tall and made of something like papier-mache.
The mystery woman told me that she was pleased that the other two small angels someone had left at the house before had gone to the right people. These two little angels were both crying and held a tear in their hands. One went to Mayor E. Jones of Wink, Texas, where it now sits on her desk for everyone to see, and the other angel went to Richard West, a close friend of Roy Orbison. (The mayor's angel was sent to encourage her to promote Roy Orbison; Richard West's angel was sent because his only sister was due to pass on from this world.)
How she knew all this I had no way of knowing. But as the fireworks exploded in the New Year's night, she challenged me to remember the time that Roy Orbison and I went searching for the Miracle Site in Wink -- and were met by three angels.
Well did I recall the incident in 1949 when we saw three fog-like forms. Roy said they were real angels, but I did not see any such thing. Roy told me they said the reason I could not see them was because I did not believe in them.

I remember telling Roy that if he ever went to the "other side," he should tell the angels that I do believe. So here was this beautiful woman trying to explain things to me. However, her "third angel" was so vastly different from the other two she spoke about that I questioned it.
I was fascinated by her lovely voice, and her beauty seemed out of this world. When I looked at her feet, I saw beautiful white and gold slip-on shoes. "Yes, we do wear shoes when we wish to do so!" she told me.
I turned to call my friend to the door, but he was slow in answering. As I turned again to speak with the woman, she was gone, and the warm glow that had filled the front yard slowly dimmed until it was dark again. When my friend came to the door, he refused to believe that the woman had been there. He could not understand, however, where I had acquired the unique little cherub I was now holding.
Slowly, the New Year's fireworks ceased and it was so quiet that my ears rang without sound. We both looked at the cherub the woman had given me. It was beautiful beyond words and so light to the touch.
Message From a Friend
For the next week I could not get the strange woman out of my mind. How quickly she had vanished! We searched the yard -- though there was no place to hide, we found no trace of her.
I began to have odd dreams about the first two angels that were smaller and so different. Eventually, we wrapped up the little cherub and shipped it to Charlie Cooper, who operated the Roy Orbison Room Lounge at the Wink, Texas, Airport.
Reflecting on my conversation with the woman, something I had not realized before began to sink into my dull mind: Roy had mentioned that the angels he had seen were without shoes. As if in response, the woman had said that "we do wear shoes when we wish to do so!"
Other things cropped into my mind, too, and it struck me like a bolt of lightning -- I had seen and had talked with the "third angel" that Roy Orbison and I had met at the Miracle Site in 1949.
Here was the answer to my question about real angels. Here was the fulfillment of my request to send me a real angel, and it had happened so quickly and unexpectedly that it took a while for the truth to soak into my dull head. Here was the Third Angel to answer all the questions that I had asked back in 1949.

Faraway Music
Today, the little cherub angel can be seen in the Roy Orbison Room Lounge at the Wink Airport. It hangs among the other items that once belonged to Roy when he lived in Wink. Some say the little angel has a healing power if you know how to use it. Others mention that the little angel is attractive and a unique addition to the Roy Orbison Room where it now hangs.
Some have said that they pray for others when they visit the lounge, but no one has come up with real proof of a miracle so far. In silence the little angel seems to be playing a musical instrument; at times, a few people have said they have heard a faraway musical chord when they were alone with it for a time.
The little angel is proof that the late Roy Orbison was able to send an angel to speak with me as requested, which is something beyond my comprehension.
If you are ever in Wink, Texas, take time to visit the Roy Orbison Room Lounge and see if the little angel still plays a silent tune for those who wish to believe -- and for those who need to believe -- in angels.
I for one no longer doubt angels -- they do exist, somehow, somewhere.

Posted by Slobodan Darko at 5:03 AM 2 comments: Links to this post